I was speaking to this good looking guy online. I thought all was going well, could I have actually found a decent guy? (Very Unlikely, thus the need for this blog.) Then he lets me know that he has a very particular set of skills…. JK, that’s what Liam Neeson says in the movie Taken. What he actually said, was that he had a very specific list of all the things he needs in a woman in order to even consider her.  As usual I am shocked but curious. I asked him what his specifications were.

So before I go on, I just want to say I am not judging this guy because kudos to him for knowing what he wants. I mean my list consists of Tall, handsome, car and tall. That’s about it.  If I have too many specifications I would be considered snooty I think and I certainly don’t want to be snooty & alone. So my bar at the moment is pretty darn low. Before I reveal his very interesting character traits that his ideal woman should have, I would like to mention that though he was good looking, tall and had a car. In no way shape or form was this guy Casanova.  But the show must go on. Here are his traits for the perfect woman: 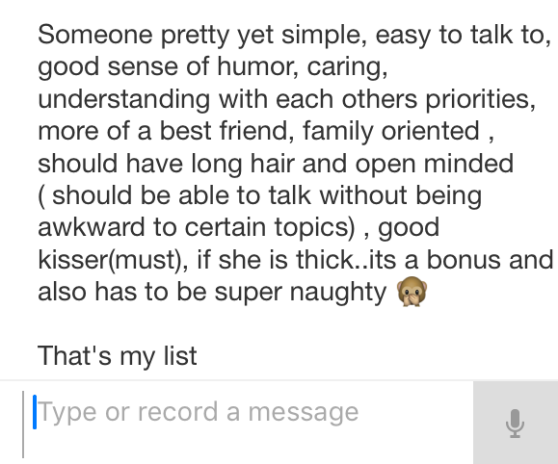 Clearly after listing these qualities, I quickly told him that he was barking up the wrong tree here. Not because I didn’t have any of those qualities, but simply because this list existed. He somewhat disagreed as he was sure there were a few things off the list that could be taught (which I thought was a bit arrogant of him). I just told him that I would prefer not to date a guy with a list because society already has enough rules that I have to follow. Things get a bit over whelming when there are so many qualities and characteristics to keep track of. Let me know what you think ladies!

Also Merry Christmas when it comes, ya filthy animals!

Golden Rule: Know what you want ladies, but make sure the bar isn’t unattainable.

Tips for Guys: Guys don’t be too picky; Mrs. Right may be scared off by all your rules.